Watching the news I found out that Internet Giant “Facebook” will be selling stock to the public.
It is thought that Facebook will soon be worth upwards of 100 Billion Dollars.

Facebook, in one of the world’s most widely anticipated IPOs, or initial public offerings of stock, filed papers this afternoon to raise at least $5 billion and begin to sell stock this spring.

The filing was made online with the Securities and Exchange Commission in Washington.  If all goes as planned, it will likely take until May for Facebook stock to begin trading on a stock exchange.

“There is a huge need and a huge opportunity to get everyone in the world connected, to give everyone a voice and to help transform society for the future,” said Mark Zuckerberg, Facebook’s CEO, in a letter that accompanied the filing. “The scale of the technology and infrastructure that must be built is unprecedented, and we believe this is the most important problem we can focus on.

“We hope to strengthen how people relate to each other,” he said.

Zuckerberg, now 27, famously started Facebook when he was a student at Harvard University in 2004.  Today, it has more than 800 million active users, and Zuckerberg said they have made more than 100 billion connections with each other.

Facebook, along the way, has made a lot of money.  It revealed in today’s filing that in 2011 it had profits of $1 billion on sales of $3.7 billion. 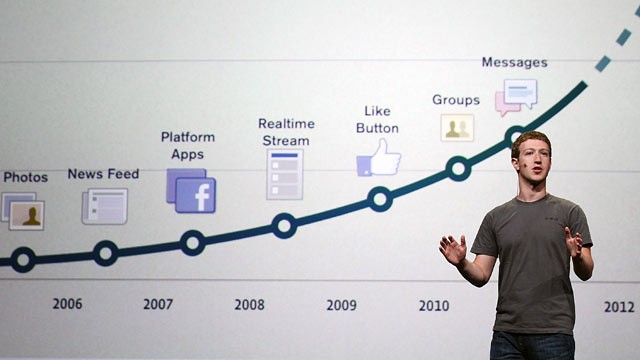 “It is a major sign of maturation” for Facebook to go public, said Lawrence Summers, the former secretary of the Treasury who was president of Harvard when Zuckerberg began Facebook. “It means more cash flow, it means even more visibility, it means even more responsibility to shareholders, but also to the broader society.

“It is both a recognition of what has been accomplished, and it points to the fact that Mark Zuckerberg has done a remarkable thing in building a global institution in a very short time,” said Summers.

Analysts said that this offering will change the Internet sector, creating what will be one of the world’s most valuable Internet companies.

“Will Facebook’s IPO be the biggest IPO in American history? Probably not,” said David Kirkpatrick, author of “The Facebook Effect.”  “But it will certainly be, by far, the biggest Internet or technology IPO we’ve ever seen.”

Others warned that Facebook may not be a surefire winner for small investors looking to make some quick money. Certainly, Facebook has been profitable, but it has already made a great deal of money as a private company.  It has more than 800 million active users — up 45 percent in 2011 — but growth in the United States and other Western countries has already begun to slow.  Most of its recent growth in membership has been in countries such as Brazil and India.

Why go public now, anyway? Since Facebook already has more than 500 investors, it is required to make certain financial information public anyway under SEC regulations. The deadline to file this information expires in April.

Zuckerberg reportedly decided to go public once it became clear that the company had become too big to keep its finances private. By going public, Facebook loses some of its mystery and cool, having to declare profits and losses and answer to shareholders every quarter. But the company will have access to new cash and can use the value of its stock to acquire other companies and to reward its employees.

Many of Facebook’s 3,000 employees could now become Silicon Valley millionaires.  Zuckerberg, himself, is already said to be the world’s youngest billionaire.  The SEC filing showed that he asked to reduce his salary to $1 per year starting next Jan. 1.

“We believe that we have an opportunity to have an important impact on the world and build a lasting company in the process,” he wrote in his letter today.